The Will to Become a Ukulele Player 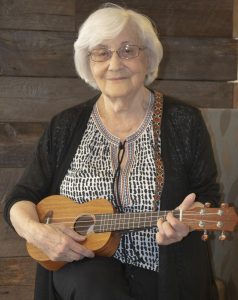 The ukulele may not be as glamorous as a guitar, but to Rose Marie Corsaletti, a resident at Wesley Village, it was unique enough to inspire her to learn how to play. Growing up, Rose Marie took piano and clarinet lessons for a short time before the music program was discontinued. Unfortunately, she didn’t have the opportunity to take private lessons. However, three years ago, Rachel Leofflad, Wesley’s Recreation Coordinator, held a ukulele session and announced that she would teach whomever was interested. At the age of 90, Rose Marie thought to herself that this was another chance to learn a new instrument, and so she asked Rachel if she would teach her how to play the ukulele. Of course, Rachel was ecstatic but had one stipulation for Rose Marie— that once she learned that she would teach others to play. Rose Marie agreed and since then, has taught several people at Wesley Village how to play.

Shortly thereafter, Rose Marie joined Rachel in offering a newly formed group program “Learn the Ukulele”. This group meets every Wednesday afternoon in the activities room for a songfest. There’s also a ukulele program that Rose Marie attends every Thursday afternoon that is run by Rachel and directed by Music Director, Nancy Boyer, also a resident at Wesley Village. This program is usually a one-hour program that consists of residents from different levels of care including independent and personal care. The program provides ukuleles to those who don’t own one, giving everyone a chance to enjoy the unique instrument. 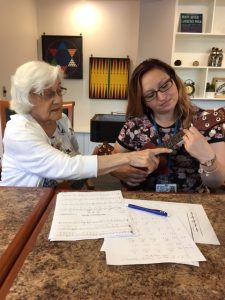 Rose Marie commented that she would have never thought she’d be playing the ukulele at her age. She’s grateful that Rachel took the time to teach her how to play and appreciates her encouragement which inspired her to start performing. Her encouragement led her to play with the Kennedy Creek Strummers, a group that often comes to Wesley Village to entertain the residents. She has performed seven times with the Kennedy Creek Strummers since learning the ukulele.

For someone who would like to learn a new instrument, Rose Marie’s piece of advice is, “to never give up”. She admits that if someone has the will, they will do it. For Rose Marie, she had a strong enough will to learn which has made her the ukulele player she is today.